"Coincidences come, and coincidences go. What circumstances foster their appearance?"

​Onada is a small village in the outskirts of Tajimi city. It’s not the kind of place passers-by will take much notice of. They drive past in their cars on the road that is snaking through Onada. They may note the petrol station and the convenience store. Some may stop at the little goheimochi shop and buy one of the local delicacies. But for the most part, they will only stop for the red lights (when they are red, of course).
Our village would probably have sunken into the mists of history if it hadn’t been for coincidence. A strange chain of events placed it in a prominent place in the history of ceramics in Japan. It is all to do with the unique, white clay that can be found here. There is reason to believe it was used to make the famous Shiro tenmoku or White tenmoku tea bowls. 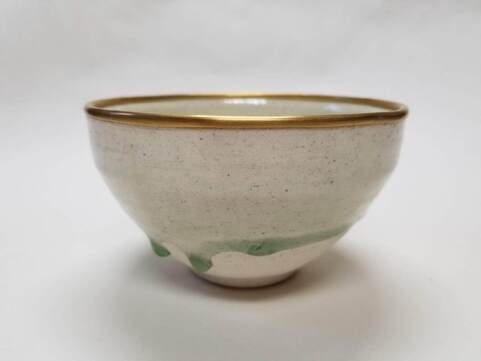 Reproduction of a Shiro tenmoku by Sokei Aoyama
Three original Shiro tenmoku have survived from the past. They are some of the most precious ceramic artifacts in Japan today. One of them, once in possession by the Tokugawa samurai house, is of unknown origin. ​​​Thanks to relatively recent discoveries it looks like Onada is the origin of the others.
To me, that’s the most fascinating aspect of this place. At first sight, it’s just another countryside village. Still, in the ground, memories live that most people, not even the villagers themselves, are yet aware of. By the discovery of a unique type of pottery, made from the white clay in Onada, the village is now on the map of ceramic history in Japan (learn more here). ​
​When I set out to present this village, which is home to the Kusanokashira Kiln, it dawned on me that maybe the most interesting way to discuss it is in a broader context. It is part of a millennia-old web of events and people that sprawls in many directions, around Japan and beyond the sea. I can only give you a hint of what they were in this short space.
​Let’s travel back to the ancient Tang dynasty in China. We fly across the land, over mountains and forests. Down there in those secluded places, monks are harvesting tea. We dive into the following Song Dynasty and see how the Zen school is established as the mainstream in Chinese Buddhism.

Tea is now appearing in legends:
​ “When Bodhidharma, the First Patriarch of the Chan [Zen] School, was living at Shaolin Monastery on Mount Song, he spent nine years facing a wall in meditation. One day, he was feeling particularly drowsy during his meditation and nodded off. When he awoke he was incensed at himself. To ensure that it would not happen again, he cut out his eyelids and threw them to the ground. Where his eyelids fell, the first tea plant sprouted.” (1) 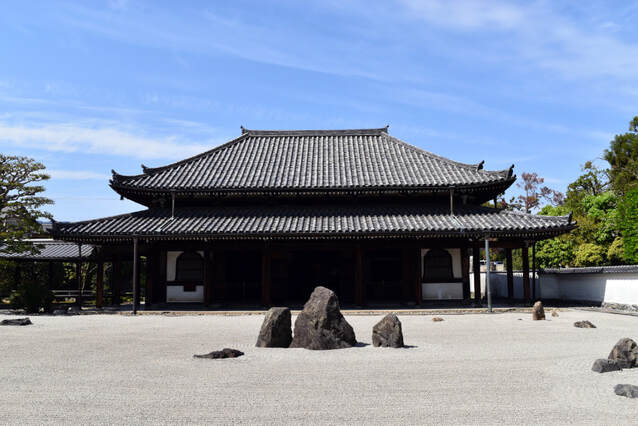 "Even when a great feast is held for a memorial service, there should not be more than two varieties of cakes served."

​Short of time, we hurry on across the sea to Japan. Now tea is not only used to keep one’s head clear during meditation but also for relaxation. But sometimes monastery life can be restricting, and some take the relaxation part a bit too far. In the Rinsei monastery in Kyoto, rules are put in place to handle the problem. In article 16 of the Rinsei regulations, it is written that:
​“It is very bad for monks who have gathered in the abbot’s or monk’ rooms for religious purposes to end the day eating cakes, sipping tea, and indulging in frivolous conversation. This type of behaviour is only permitted after a Buddhist memorial service. But even when a great feast is held for a memorial service, there should not be more than two varieties of cakes served.” (2)
​The author of these regulations is a key person in our story. He is Musō Soseki, a man that has been written about widely, including by foreign scholars. 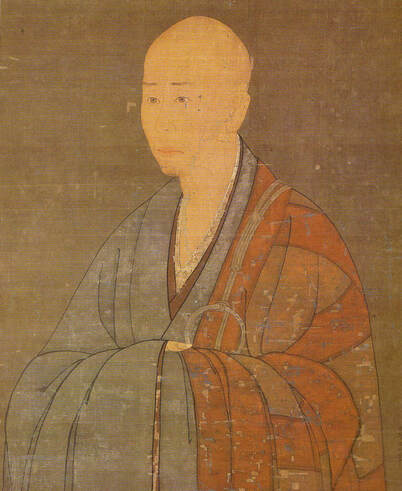 Musō Soseki
Many years earlier, in 1313, he was invited by the local lord Toki Yorisada in the Mino province to settle in a secluded area then known as Nagaseyama. He built a hermitage, the Eihoji, in a narrow, secluded ravine. The following year he builds a Kannon Hall there.

I spent much time pondering where this place could be. Mino is the historical name for the region we live in. There was a hermitage called Eihoji. That is the name of the Zen temple just a couple of kilometres from Onada village. And it sits in a narrow ravine, just like the Eihoji here... "Oh my God!" I thought. That hermitage is the beginnings of the Eihoji we know today! Musō lived here!

It is in these moments one can feel the tide of history. Now and then I visit the temple area where the Kannon Hall stands. Some time ago I saw it opened for the first time for a marriage ceremony. "Musō must have been walking these very grounds", I ponder. One of the most famous people in the history of Japanese Zen spent a few years of his life here. Furthermore, I discover that he is also the architect of the beautiful temple garden.

His residence here would last only a few years. New opportunities arise, and he moves back to Kyoto in 1317 to take up a position at the Nanzenji Temple. He asks his old student friend Genno Hogen (1282－1332), to take care of the of the new temple in Tajimi. It is still under construction. Genno passes away in 1332, three years before its completion. Eihoji stands by the road a couple of kilometres from Onada. It is another important location in our story.
Musō is an ambitious man, and from his base in Kyoto he establishes a network of Rinzai Zen temples that begin to spread across the whole land. To my surprise the core group of temples in Kyoto include a couple I visited many times during my years as a tour guide. The famous Tenryuji in Arashiyama, and the Saihoji, or Moss Temple are both huge tourist attractions today. The Rensaiji combined the scale and the seclusion of these two. 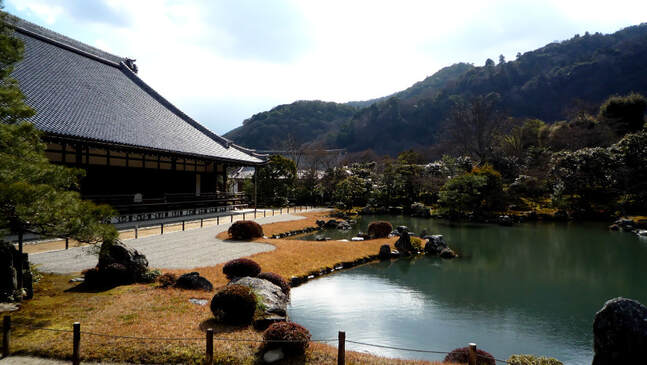 The Tenryuji Temple, Kyoto
​By osakaosaka - Own work, CC BY-SA 3.0, https://commons.wikimedia.org/w/index.php?curid=8767864
As we travel through time ​the web of temples forms a formidable network across the country. It begins to serve as a tool for control for the government. Monks travel to and fro carrying information. 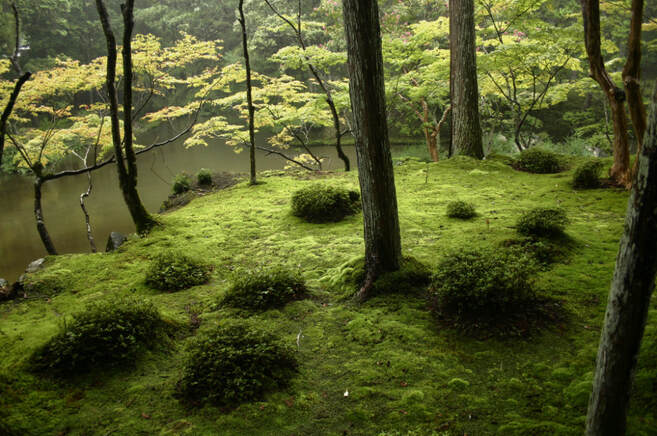 The Saihoji (Kokedera Moss Temple), Kyoto
​By Ivanoff~commonswiki - Self-photographed, CC BY-SA 3.0, https://commons.wikimedia.org/w/index.php?curid=511050
How does this connect to Onada? “Buddhist temples in Japan possessed many tea utensils since there was a connection between the tea ceremony and Zen,” says Sokei Aoyama at Kusanokashira Kiln. I believe the tradition arrived at Onada by way of monks travelling between temples. As you know, we have a large and significant Zen temple in Tajimi, the Eihoji. Temples are part of a nationwide network. Eihoji is connected to the Rinsenji in Kyoto, so those Kyoto monks may have brought the Tea Ceremony and sophisticated tea utensils here. Somewhere in the process of producing replica Chinese Tenmoku, a native form was born. I believe the Shiro Tenmoku must have come into existence this way, and that it happened in Onada.”
360° view over the "narrow valley" in Tajimi where the Eihoji hermitage was built. To the right, the Kannon Hall built by Musō Soseki.
We see the connection now - a tea culture originating in China is imported into Japan and spread via this vast network. It all relates to China, but when this culture enter Japan it undergoes important changes.

One central turning point is a document now known as the Kokoro no fumi (心の手文, "Letter of the heart"). It is a letter by Murata Jukō (村田珠光, 1423–1502), a man known as the founder of the Japanese tea ceremony. It is thought that he wanted to introduce Japan's merchant class into the world of tea, and believed that Japanese ceramics too had a place in the ceremony where Chinese ways had previously dominated. It is said that Murata wanted to create a harmony between the imperfections and rustic aesthetic of Japanese utensils on the one hand and the regular forms and perfect glazes of Chinese ceramics
Gradually the connection to China weakens. By the midst of Japan’s samurai-dominated medieval age (1185-1568) tea had also become a central part of their warrior culture. Green powdered tea was scooped into a rather large bowl and whipped into a frothy, bitter-tasting drink with hot water poured from a kettle. Powdered tea was a Chinese invention, but not common there anymore. Most importantly, the samurai loved their tea bowls! The bowls too had begun to break away from the Chinese style. ​

​When monks traveled between temples they carried tea utensils with them. Because of this new thinking, Japanese tea bowls were now travelling in their luggage.
​We now return to our village, Onada. Several kilns produce pottery here during this period. The technology is not as advanced as in China. There is no perfect symmetry in the shapes, but this starts to catch on among the wealthy tea-drinkers. Tea masters like Murata Jukō and later Sen no Rikyu begin to make the case that organic, rustic designs are closer to the heart of the Japanese Tea Ceremony. ​The growing importance of the ritual drives the demand.
​As we have seen, tea utensils have now become highly valued items. Among the most famous in Japan are a handful of medieval white tea bowls still in existence that are thought to have been in possession by Takeno Jōō​, a legendary tea master. They are Shiro tenmoku, or White tenmoku, and extremely rare in the sense that they are made from white clay. Aoyama-sensei suspected that there were white clay deposits somewhere in Onada suitable for the production of this kind of pottery. He had a hunch that Onada may have been the origin for Takeno's bowls. Could they have been made here? 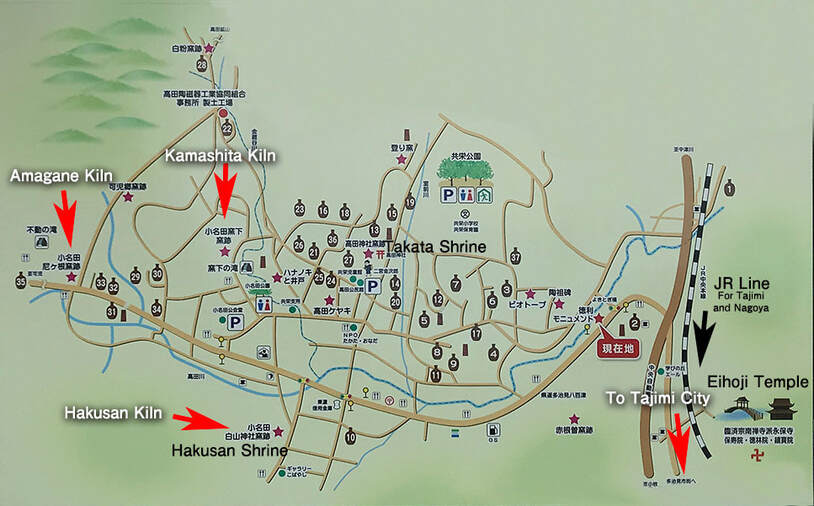 Map of ceramics related sites in Takata/Onada. Stars indicate historical sites. The Kusanokashira kiln is located close to number 31 on the map.
Artisans of those days didn't produce goods for art's sake, but on request from their clients. The white Onada pottery must have traveled through the network of temples and created a demand. There must have been wealthy clients who wanted something a bit different. It seems quite plausible that new shapes developed in the process, resulting in the crown jewel - the Shiro tenmoku.

Master Aoyama set out on a journey to recreate the bowls and present evidence that the few preserved Shiro tenmoku were indeed made in Onada. After decades of trial and error, his theory has gained wide acceptance.
​
But that is a story for another day.
360° view of the Hakusan Shrine. The shrine is located close to where the old Hakusan Kiln once stood.